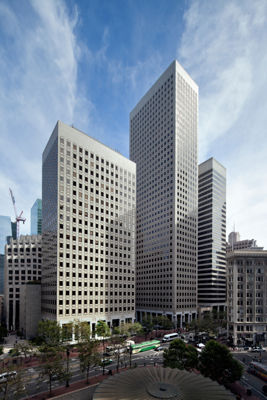 Northwestern San Francisco’s Financial District is home to many of the city’s most notable legacy and up-and-coming businesses. During the week, the streets are flooded with banking, insurance, finance, and tech professionals, but the neighborhood tends to become quieter on weekends. Residents get to enjoy beautiful skylines and proximity to the water as well as an environment where they can find the people, resources, and office space they need to grow.

In total, the San Francisco Financial District offers more than 53 million square feet of commercial office space, with nearly 11% of the space currently available for direct leasing. That rate is slightly higher than the city-wide average vacancy of just over 9%. On average, space-seekers can expect to pay $76 per square foot to rent office space in the Financial District.

Those looking for Financial District office space tend to end up in Class A buildings, as the neighborhood houses just over 44 million total square feet of Class A inventory. The Class B inventory is limited to only about 9 million square feet.

What Our Brokers Say About Financial District

Many Financial District residents use the San Francisco Municipal Railway, or Muni, bus and rail lines to get around; find several stops along Market Street. The Bay Area Rapid Transit (BART) has some stops in the district, too: Embarcadero, Montgomery, and Powell Street. The Golden Gate Ferry is nearby for those who like to travel by water—and, of course, enjoy a great view of the Golden Gate Bridge. Many San Francisco locals get around and get to work on foot or on bicycles, but unfortunately the city has a higher than usual rate of casualties for pedestrians and cyclists.

Those who work out of the Financial District will find no shortage of places to meet up outside the office for a meeting, lunch, or cup of coffee. Ideal restaurants for business meetings include Per Diem, Boulevard, Barcha, and Tadich Grill. Shake up your routine by scheduling a walking meeting through one of the neighborhood’s many nearby parks and gardens. Look up Yerba Buena Gardens, Sue Bierman Park, or Empire Park.

Many landmarks and interesting features in and near the Financial District help make it a popular and ideal place to run a business. Notably, many of the area’s commercial real estate buildings date back hundreds of years and serve not only as work spaces but also as beautiful landmarks and tourist destinations. For example, the Hearst Building is a famous office building wherein William Randolph Hearst operated and published the San Francisco Examiner newspaper for many years beginning in 1980. When he moved to NYC, he went to on to build the nation’s largest newspaper chain and became famous in the journalism world. The Hearst Building features historical architecture and is still used to house modern businesses.

Another famous historical office building in this neighborhood is Columbus Tower, or the Sentinel Building. The Sentinel Building’s construction finished in 1907, and it became a nightclub that featured a lot of stand up comedy. After the building changed hands a few times, it became a commercial space. American Zoetrope, a film studio co-founded by George Lucas; NPR; PBS; Pixar; and Skywalker Sound are all current tenants. The Transamerica Pyramid office building is San Francisco’s second tallest skyscraper and one of the neighborhood’s icons. Though Transamerica Corporation no longer has its headquarters there, ATEL Capital Group, Rembrandt Venture Partners, and Bank of America Merrill Lynch are current tenants.

San Francisco enjoys a storied past. The city-county was founded in 1776 by Spanish colonists who named it after Saint Francis of Assisi. The city’s significance as a major finance center on the West Coast dates back to the California Gold Rush in the early twentieth century.