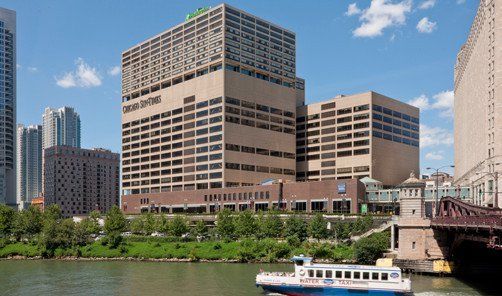 River North is a technology-driven neighborhood in Near North Side, Chicago. It’s full of upscale housing, art galleries, rooftop bars, extensive commercial real estate, and big-name businesses. ConAgra, Groupon, and Motorola Mobility all have their world headquarters in River North, and Google and Yelp have regional offices here. This district is home to the River North Business Association, which is dedicated to providing marketing opportunities, programs and networking events, and advocacy roles to hundreds of local businesses.

But River North isn’t all business. It’s one of Chicago’s best destinations for nightlife and contains an impressive collection of restaurants and galleries. In fact, this neighborhood boasts one of the highest concentrations of art galleries in the nation.

River North includes a total of nearly 16 million square feet of commercial space, but only about 5% of it is currently vacant and available to renters. On average, office space in this area costs $44 per square foot to rent. This pricing is comparable to other popular areas such as North Michigan Avenue and Fulton Market. Most commercial spaces located in River North are Class A (about 10 million square feet), but the neighborhood also offers Class B and Class C spaces. Class A spaces cost approximately $49 per square foot to rent, while Class B spaces average around $39, and Class C spaces around $34.

What Our Brokers Say About Office Space in River North

River North is bounded by Chicago Avenue to the north, the Chicago River to the south and west, and Michigan Avenue to the east. The neighborhood can be divided into several districts, which are simply named after what they feature: the gallery district, the restaurant district, the cathedral district, the design district, and Kingsbury Park. Streeterville, the Magnificent Mile, and Little Sicily are nearby neighborhoods. Most of the buildings in River North are former industrial warehouses that have been transformed by artists and entrepreneurs into trendy workspaces. River North is a common destination for young professionals and empty nesters.

River North offers many transportation options, facilitating commutes for those who live in the area. A commonly-used mode of public transportation is the Chicago Transit Authority (CTA), also called the L. The Red, Purple, and Brown Line trains primarily operate in this area. The following stations are located within the River North neighborhood: the above-ground Chicago-Brown and Merchandise Mart-Brown stations and the below-ground Chicago-Red and Grand-Red subway stations. Buses are also a popular public transportation choice, as are taxis. Those who like to get some exercise while commuting or running errands will not be disappointed; River North is relatively safe for pedestrians and ideal for bicyclists. For those who want to get away, Midway International Airport and O’Hare International Airport provide two nearby options for traveling domestically or internationally.

Finding the right office space is the first step. Knowing where to go when you’re not in the office is the second step. Everyone needs to take a break every once in a while for a bite to eat or some fresh air. To try some delicious food in River North, visit The Kitchen, River Roast, Hampton Social River North, The Boarding House, or Bavette’s Bar and Boeuf. River North has some great parks, too. Get some midday exercise or schedule a walking business meeting at Erie Park, Montgomery Ward Park, or Milton Lee Olive Park.

River North is known for its various picturesque skylines punctuated by some of Chicago’s most famous structures. For example, River North contains the Wrigley Building. Built between 1921 and 1924, this building served as the Wrigley Jr. Company corporate headquarters until 2012. Today, one of its tenants is the Consulate General of Austria. Another famous location is the House of Blues; this music venue features concerts and events, and offers the option to host private events. Other famous structures in River North are the Holy Name Cathedral and the Marina City towers.

River North has undergone quite a few changes throughout the years. It is part of the Near North Side area of Chicago, which used to be primarily a swamp. The area was still useful because it served as ideal grounds for transportation structures, industrial activities, and trading ventures.

The Chicago Fire of 1871 destroyed many of Near North Side’s structures. Developers rebuilt the area with more warehouses, shipping facilities, and railroad tracks. Around this time, people began to call River North “Smokey Hollow” because it contained so many factories that the smoke from them actually hid the sunlight. In the 1880s, most people who lived in Smokey Hollow were Sicilian or Irish. Today, one area of River North is called Little Sicily. The first Italian Roman Catholic Church in the city was built in this area.

Though Smokey Hollow was a popular industrial area and transportation hub for a while, the port was eventually moved elsewhere. Smokey Hollow seemed to have been forgotten between 1920 and 1960—but in just a few years, things would drastically change for this area.

When Chicago real estate developer Albert Friedman, chief executive of Friedman Properties Ltd., began purchasing and revitalizing properties in the southeast end of the city in 1974, he called this area “River North” to attract tenants and erase the memory of the shady “Smokey Hollow.” Many of his first tenants were art galleries, photography studios, and ad agencies, leading to what is today called the River North Gallery District.

The population in River North increased by about 80% in all four census areas between 2000 and 2010. Today, River North is known for its high-income neighborhoods, fancy bars, rich artistic community, and exciting nightlife.