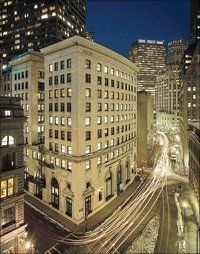 The Financial District houses Boston’s highest concentration of commercial office space. It houses some of Boston and the nation’s leading investment firms, such as Fidelity Investments and Putnam Investments.

Other Boston workhorses such as Wolf & Company, Oracle, LEK Consulting, AT Kearney, Converse, Digitas, Boston Consulting Group, and WeWork, already call Boston’s Financial District home, as do many startups and mature mid-size firms. Given the density of talent and the available inventory, Boston’s Financial District is an appealing place to rent commercial office space — even for those outside the financial services world.

Compared to other Boston areas, leasing office space in the Financial District is slightly above the Boston Metro average. However, the density of talent, accessibility by public transit, the proximity of clients and neighboring businesses, and the variety of vacant office space makes the Financial District an appealing place to root your business. With a vacancy rate of 6.5%, comfortably near the city’s 6.8% average, there’s ample (nearly 2 million sqft as of Q2 2018) inventory for businesses to find the perfect office space.

In order to keep up with Boston’s healthy job market, there is more than 300,00 square feet of redevelopment and new construction currently underway in the Financial District.

What Our Brokers Say about Financial District Office Space

Offices in Boston’s Financial District enjoy a range of convenient public transit options. If you’re commuting into the area from Boston suburbs, bus lines 4, 15, 39, 57, 89, 92, and 93 will shuttle you straight to the heart of the Financial District.

Located near Downtown, Government Center, and Chinatown, the Financial District is easily accessible to commuters from all over Boston’s suburbs. Whether you’re commuting by bus from nearby Fort Point, or you’re making an hour long ferry journey to South Station, the Financial District is easily accessible from all of Boston’s most desirable residential areas.

While many employees spend their time in the Financial District working for large corporations, banks, and investment firms, the area is brimming with some of Boston’s oldest landmarks, including the site the served as the genesis for the Boston Tea Party: the 18th-century Old South Meeting House.

In addition to its wealth of financial firms, the area is also well know for other historical sites. In the Financial District, visitors explore the landmark Custom House Tower, Post Office Square and the International Place complex. Shoppers, too, pass time in the Financial District visiting the markets at Faneuil Hall and the busy pedestrian mall that runs along Summer Street.

Get to Know the Financial District

Unsurprisingly, the Financial District houses a wealth of mutual fund companies like DWS Scudder Investments, as well as the international headquarters for banks including Eastern Bank and State Street Bank. Local offices, too, call Boston’s Financial District home, as Merrill Lynch and other brokerages set up shop in this Boston district.

If you’re searching for reputable financial and law firms — or office space to start your own company — be sure to visit the area’s notable buildings. To get started, visit One Financial Center and Dewey Square. Other spots worth investigating include 100 Summer Street and One Federal Street.

And if you want a break from the stresses of work, Boston’s Financial District offers a wide variety of entertainment. For a break from office walls, enjoy lunch in Norman B. Leventhal Park, a welcoming green space complete with a sculptural fountain and a garden trellis. To entertain clients after hours, take your guests on a tour of Faneuil Hall Marketplace, Boston City Hall, and the Boston Harbor — yes, the  Boston Harbor where the Boston Tea Party took place.

Other popular places to meet up with a client? Heritage Restaurant for great views and vineyard to table fare, the Salty Pug for a pork-obsessed lunch, and Coogan’s for an unpretentious drink.