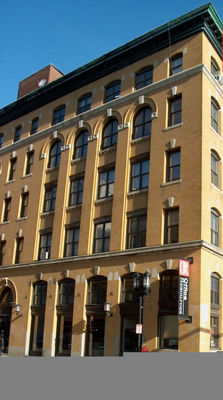 Seaport wears the signs of great transformation. The Boston neighborhood was once shaped by shipping industry growth in the 1800s, then marked by a century of abandoned parking lots and empty warehouses in the 1900s, but its recent high-profile development projects have cemented its reputation as Boston’s Silicon Valley equivalent.

Over the last decade, Seaport has become increasingly attractive for commercial tenants — most notably a climbing number of tech startups — seeking top talent in a bustling, culturally diverse community. With ongoing commercial construction, nearby universities, and a slew of tech companies, Seaport is a neighborhood to watch in Boston.

The neighborhood’s longstanding industrial character is particularly attractive to startups in market sectors like hardware and manufacturing. In Seaport, companies can rent repurposed, brick office space for an average of $53 a square foot. Popular places to lease commercial office space in Seaport include the Drydock area, a tech-rich spot known for its gritty feeling and creative energy, and Seaport Boulevard.

A couple of decades prior, it may have been difficult to lease Class A office space in the Seaport district. But thanks to heavy investment and revitalization efforts, tenants are renting Class A office space in Seaport for an average of $64 per square foot. At the current rate, Seaport could catch up to East Bay in terms of cost and popularity.

Big-name companies are recognizing Seaport’s vitality. Amazon is currently designing a new office in Seaport’s Harbor Park Square. The 525,000 square foot space has been approved by the Boston Civic Design Commission, and the e-commerce giant will provide 2,000 jobs in the new 17-story office.

When it comes to finding fertile, tech areas, Amazon is trend-setter. And other life sciences and e-commerce companies are starting to recognize Seaport’s value as a talent hotbed. The neighborhood’s unique location, critically situated at a Silver Line connection from Boston’s Red Line, let’s the area’s best talent travel easily to and from work. And as more companies fill commercial office space in the neighborhood, Seaport is establishing its position as one of Boston’s fastest-growing submarkets.

What Our Brokers Say about Seaport District Office Space

With an onslaught of new construction, development is booming in Boston’s Seaport neighborhood. Thanks to a huge push from former mayor Thomas Menino, city resources have been concentrated on revitalizing the old Seaport district. Some of this recent investment includes developing affordable, yet trendy, micro-apartments geared towards millennials in their late twenties and early thirties to attract nearby university talent to the area — and it’s working.

Due to an influx of tech and life sciences companies, Seaport boasts the second highest volume venture capital funding and the city’s highest volume of lab space.

The presence of cost-effective houses is drawing a steady hiring pool of fresh talent to Boston’s Seaport neighborhood, and companies are beginning to follow suit. Early this year, Cengage leased a 117,000 square foot space at the under-construction Pier 4 in the Seaport. As a leader in educational content, the company’s relocation will likely spur other companies to take advantage of the new construction happening in Boston’s Seaport District.

Other companies, like pharmaceuticals giant Alexion and software company PTC have also chosen Seaport as their home. Both businesses will occupy 150,000 square foot plus spaces on Seaport Boulevard.

Getting Around Seaport District

One of the biggest draws to Seaport is its access to public transportation. Over 280,000 commuters ride Boston’s Red Line to get to and from work each day, making proximity to Red Line stations a major draw for commercial offices. Seaport is located at a nexus where the Red Line meets the Silver Line, making it an easy travel point from all across Boston.

And if you’re traveling from out of town, I-90 and I-93 provide direct and quick access to Logan International Airport.

Despite today’s buzz around the desirable Seaport area, this Boston neighborhood has humble beginnings. Seaport’s origins are industrial: in the 1800s, Boston Wharf Co. was the major developer in the area, and most Seaport employees were dock workers. Manufacturing, too, provided many workers with jobs at Boston Button Co. and Boston Asphalt.

But as industries shifted and the country moved into the Information Age, the docks in Boston’s Seaport area fell quiet. But in recent years, Boston’s “Big Dig” and former Mayor Menino’s construction initiatives have given the Seaport District new life. The docks are once again filled with workers, although today’s work is done with technology in hip, converted warehouse spaces.

New restaurants and mixed-use developments continue to spring up in the Seaport District. As tech start-ups and venture capital firms continue to congregate in Seaport, the value of commercial real estate in the area is on the rise.