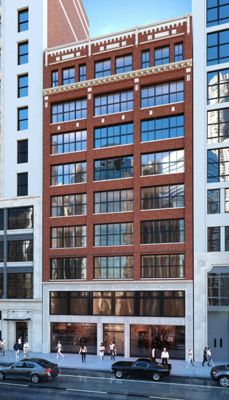 NoMad office space, short for “North of Madison Square Park,” is part of the Madison Square North Historic District and covers the small area between Chelsea, Flatiron, Murray Hill, and Madison Square Park in the Bureau of Manhattan. Manhattan is the most densely populated borough in New York City with approximately 1.6 million residents. The borough’s daytime population more than doubles during weekdays as commuters flood the city to work in over 500 million square feet of office space.

NoMad, an up-and-coming neighborhood, has only stepped into the limelight within the past few years. The ACE Hotel—a coffee shop, hotel, boutique, restaurant, and bar—opened on 29th Street and ushered in other exciting establishments in the area.

What our brokers say about NoMad

NoMad houses several well-known buildings, such as the New York Life Building, which includes the headquarters of the New York Life Insurance Company; the Gift Building, a landmarked historic building that now serves as a luxury condominium; and the Toy Center, which used to be an important center for toy manufacturers but is now an office building. NoMad is also known for its hotels. In the past, visitors could find some of the city’s most impressive and luxurious hotels in NoMad—the Fifty Avenue Hotel, for example. The Ace Hotel, Royalton Park Avenue, and the King and Grove Hotel are some of the modern hotels in the neighborhood that help the neighborhood retain its reputation for luxury hotels.

NoMad office space for lease | By the numbers

Businesses looking for a cheaper option might consider subleasing office space. Office subleases are arranged directly with a current office tenant and may lack the assurances that come with a direct lease through a landlord. However, for businesses that need additional flexibility, lower costs, and privacy unavailable at a coworking office, subleasing could be a good strategy.

NoMad’s location and many transportation options make it easy to come and go and access other parts of the city. The neighborhood offers plenty of subway and bus options, though regular traffic can get very congested.

Like most of Manhattan, NoMad traffic tends to be very congested. According to the annual INRIX Global Traffic Scorecard, New York City is the third most congested city in the world and second in the United States, only behind Los Angeles.

Ready to secure office space in NoMad, one of the most exciting up-and-coming neighborhoods in Manhattan? Contact one of our experienced brokers to find the space that’s right for your business. Or, lease space in one of these three SquareFoot-recommended buildings in NoMad:

– 246 5th Avenue: Built in 1920, 246 5th avenue is a six-story office building with just over 32,000 square feet of rentable office space. Often called “Flatiron North,” this building currently has four units available for rent. One is 2,500 square feet in size, one is 5,000 square feet, one is 10,000 square feet, and one is 20,000 square feet. Contact us for pricing information and other details. Caffe Bene and Argus Realty Investors already rent space at 246 5th Avenue. Take the Yellow Line (N, R, and W), the Green Line (6), the Orange Line (F, M), or the PATH train to access this property. The 28th Street and 23rd Street stations lie less than .25 mile away from the building. The area is absolutely full of bars, coffee shops, and restaurants that 246 5th Avenue tenants can walk to in moments. Take a coffee break at Idea Coffee or Birch; grab lunch at L & W Oyster Company, Ben & Jack’s Steakhouse, or Pondicheri; and get a drink with coworkers at the end of the day at The NoMad, John Doe Bar & Kitchen, or 230 Fifth.

– 12 West 27th Street: 12 West 27th Street is an 18-floor, Class B office building that offers a variety of different floor plans depending on business needs and requirements. The building also features large windows and recently renovated bathrooms. At the moment, five units ranging from 1,500 to 5,458 square feet in size are open and available to new renters. Contact us for pricing details. Allen & Killcoyne Architects, Blade Design, Soul Cycle, and Allied Works Architecture already rent space at 12 West 27th Street. 12 West 27th Street has a noise index of .5 and a Walk Score of 100. Access this property via trains B, D, F, M, N, Q, R, W, 1, or 6. Several parking garages are available within reasonable walking distance for employees who want to drive to work. The area has plenty of restaurants, such as Sweetgreen, The Smith, Maysville, Izakaya NoMad, and Pondicheri.

– 114 West 26th Street: 114 West 26th Street is a 12-story, Class B office building technically located in Chelsea, which is right next-door to NoMad. Chelsea is known for its high-fashion boutiques, such as Alexander McQueen, Stella McCartney, and Christian Louboutin. Built in 1911, 114 West 26th Street features fiber Internet and a lobby attendant. Current tenants include Samba TV, The Born Group, the Documentary Group, Thuzio, and NOMAD Editing Group. Three units are available for lease in the building. One is 200 square feet in size, sone is 9,200 square feet, and the third is 9,300 square feet. The building is close to lots of public transportation options. Take trains 1, 2, 3, B, C, D, E, F, M, N, Q, R, or W to access 114 West 26th Street. An unusually high number of fitness centers surround the building. Health-conscious employees can try PopPhysique, Studio Anya, Peleton, McBurney YMCA, Flywheel Sports, Yogamaya, Monster Cycle Limelight, and many other options just steps away from the office.

Madison Square Park was founded in the 1600s, and NoMad’s history is quite intertwined with that of its adjacent park. Madison Square Park stretches from Madison Avenue to Fifth Avenue between 26th and 23rd Streets. Originally, the park was a military parade ground, and even today, NYC’s yearly Veterans Day Parade begins there. However, in the mid-nineteenth century, people began using the Madison Square Park area for other things. In particular, affluent residents began building mansions and brownstone homes around the park.

In the 18th Century, the main route to get to New England divided from Broadway at 23rd Street, making NoMad a crossroad of NYC. Then, it became a hub of entertainment, theatre, shopping, and dining at the end of the 19th Century. In fact, business activity began to overshadow the area’s residential scene.  Over the years, the district became the home of numerous famous people, such as Oscar Wild, Teddy Roosevelt, Mark Twain, J.P. Morgan, and Thomas Edison. Though it included its share of well-known or rich residents, it has nearly always had an interesting mix of people. West of Broadway, an area called Satan’s Circus used to contain an unusually high number of shooting galleries, betting parlors, bars, and brothels.

Today, NoMad is overall more family-friendly and boasts attractions like top-notch hotels, beautiful landscaping, historic art, music, food events, and, of course, Madison Square Park. Currently, the 29 Street Association is working on possibly extending the borders of the Madison Square North Historic District Extension. The extension would increase the size of the historic district to include 286 buildings that were first constructed between the 1840s and the late 1930s. The 29 Street Association argues the expansion’s importance by noting that “These buildings, when taken together, have an instantly recognizable physical presence and create a sense of place quite distinct from other parts of Midtown Manhattan.”