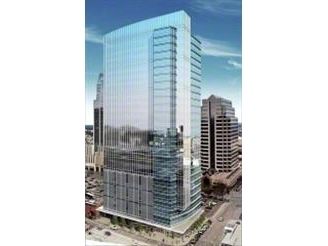 The Colorado Tower, designed by Duda/Paine Architects and opened in 2014, is located at 303 Colorado Street in the Warehouse District of Austin’s Downtown. The skyscraper is the newest major addition to Austin’s skyline.

This truly exquisite modern structure features a sleek glass façade and stands at the corner of Colorado and West 3rd Street. The twenty-nine story structure’s glass exterior appears to be composed of two separate skyscrapers that have collided and extended beyond each other at a ninety-degree angle. The two distinct parts of the Colorado Tower even have different glass patterns to emphasize the collision effect. The section of the building that is parallel to Colorado Street has a glass façade with prominent horizontal stretches while the section that is parallel to 3rd Street is marked by horizontal ridges that distinguish each floor of the building.

Although the Colorado Tower’s sleek exterior is mesmerizing, the building’s lobby also stands as an equal aesthetic and design achievement. At the base of the building a canopy extends from above the entrance of the lobby providing pedestrians and tenants with a shelter from inclement weather. The lobby, located at the corner of the building is highly visible from the street. The exterior of the space consists of glass panels that are beautifully rendered between columns which are covered with bright pale wood. Inside the lobby, a mixture of dark and pale wooden paneling adorns the walls and ceilings of the space while a light aqua blue modern painting decorates the middle section of the wall across from the lobby’s entrance.

Current Colorado Tower tenants include Invesco Investment Group, Parsley Energy and Atlassian Software. Tenants can drive to work, using the nearby I-35 or use the light rail system which is only a few blocks away, by way of the Downtown stop next to the Austin Convention Center.