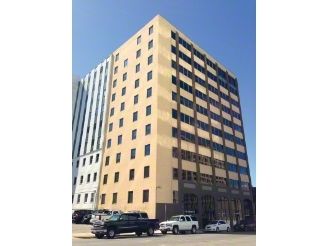 815 Brazos Street is an eleven story high rise in the high tech hub of Downtown Austin. The building is stationed just three blocks from the Texas Capitol.

The building was opened in 1956 and renovated in 2001. The structure’s facade features a tan and brown concrete facade and one of the building’s notable tenants is Civicsolar.

The high rise’s lobby entrance is at the corner of 8th and Brazos Street directly next to the building’s street level UPS store. The building’s lobby and common areas have also undergone a recent renovation.

815 Brazos Street is located near the entrance to I-35, Loop 1 and is within walking distance to the Austin’s light rail Downtown station next to the Austin Convention Center. The Austin-Bergstrom International Airport is also only 15 minutes away by car.