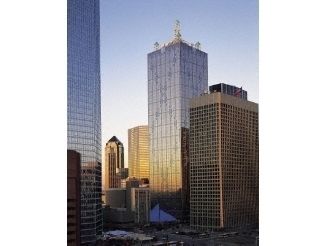 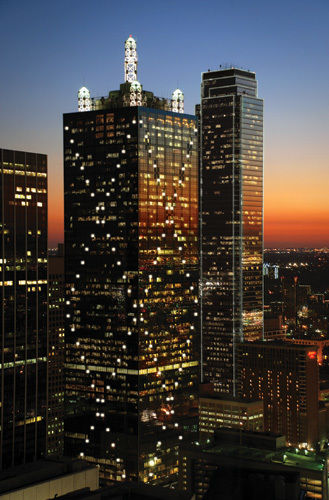 Located in [Downtown Dallas] (http://www.thesquarefoot.com/dallas/), Renaissance Tower is the second tallest building in the city and one of the 30 tallest buildings in the entire US. When it was completed in 1974, it was the tallest building in Dallas and was actually named the First International Bancshares Tower. It was designed by Hellmuth, Obata and Kassabaum, a global architecture, interiors and engineering firm.

Renaissance currently serves as the headquarters for large companies such as Blockbuster, Winstead PC, and Neiman Marcus.

After being passed up in height by buildings like Bank of America Plaza, Comerica Bank Tower, Chase Tower and Fountainplace, the building went through a major renovation in 1986. The upgrades included the removal of the side lighting and a re-glazing of the exterior. A broadcast center and towers were also designed and constructed at the top of the tower, which brought the Renaissance Tower up to the second tallest [building in Dallas] (http://www.thesquarefoot.com/dallas/office-space/downtown-dallas). At the base of the building is an underground food court which connects with other underground shops in the area.

The tower was prominent in the hit American TV series “Dallas” and is still frequented by tourists wanting information on the show. Today, the sides of the tower light up in a criss cross pattern.