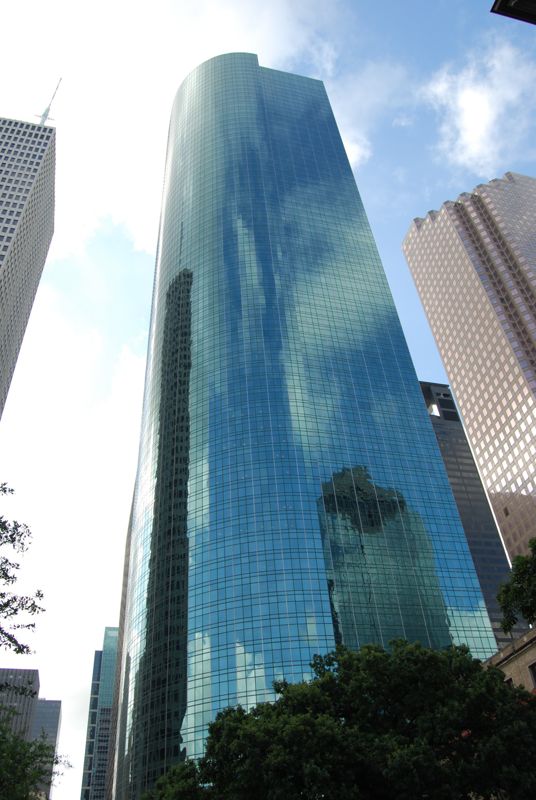 1000 Louisiana Street in Houston, TX, is located on the corner of Lamar Street and Smith Street in the heart of Downtown Houston. Built in 1982, this 71-story luxury office building was designed by Richard Keating and rises 992 feet above street level.The structure is a sleek skyscraper consisting of two quarter circular shaped cylinders made of steel and aqua blue glass. Four of the floors that make up 1000 Louisiana Street are underground. This makes it the 20th tallest building in the United States and the second tallest in Houston. This luxurious office building boasts a whopping 1,833,760 square feet of interior space.

The eye-grabbing glass tower features anything a tenant could need. There’s direct underground access to the metro/subway and dining available in the “Adair Downtown” tunnel level. Moving to the street, valet parking is available. Aside from the elegant ground floor lobby, there are chic lobbies on the 34th and 58th floors, which offer incredible city views. The building’s features also include an auditorium, fitness center, and a 58th-floor “Sky Board Room.”

The building located at Wells Fargo Plaza was designed and executed by Skidmore, Owings & Merrill. The Wells Fargo Plaza offers high-tech features, like valet parking apps that allow tenants to have their cars brought out at just the right time. Double-decker elevators serve the building’s tenants to keep things moving, too.

The building’s tenants include PricewaterhouseCoopers, Morgan Lewis as well as the building’s namesake. The Wells Fargo Plaza is situated above the Houston Tunnel System and tenants can use this network to move freely around the Downtown area for meetings and lunch runs all while avoiding the oppressive heat outside.

The building is surrounded by Houston’s only sunken plaza which is a pleasant gathering spot for tenants. High above the plaza two beautifully designed sky lobbies with marble floors offer terrific views of the Downtown and the city’s surrounding areas.

Along with the building’s access to the Houston Tunnel System it is also conveniently located near I-49 for tenants that may commute by car.