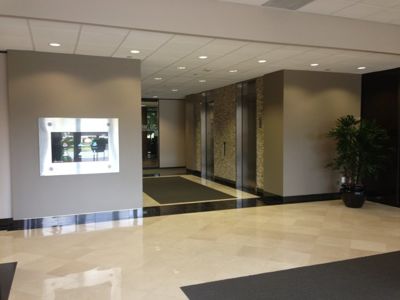 The impressively interconnected towers of Greenway Plaza offer plenty of options for office space seekers. Approximately 17% of the neighborhood’s total inventory of space is currently available for rent. Landlords charge about $34 per square foot to rent commercial real estate space in Greenway Plaza, which is slightly higher than the $31/sqft Houston average. Class A spaces comprise just over 7 million square feet of the total space, and right now about 17% of them are available to new tenants. Class A spaces in Greenway Plaza cost about $36/sqft to rent. About 4 million square feet of the remaining commercial space is Class B, which costs about $27/sqft to rent. Greenway Plaza office space pricing is similar to that of Katy Freeway East, Midtown, and The Woodlands.

What Our Brokers Say About Greenway Plaza Office Space

Greenway Plaza rests along Interstate 69 (U.S. Highway 59) in the southwestern part of Houston. Nearby neighborhoods include Downtown, Uptown, Upper Kirby, West University Place, and River Oaks. In fact, Downtown Houston is only a five-minute drive away. Some real estate brokers consider Greenway Plaza part of a larger area called Greenway/Upper Kirby, which is about 3 square miles in size. The business campus itself, just Greenway Plaza, is only about 52 acres in size.

Travelers and commuters can easily access Greenway Plaza using I-10 West or East, I-610 North or South,  I-69/US 59 South, or Westpark Tollway West.  Greenway Plaza is located within a convenient driving distance of both George Bush Intercontinental Airport and Hobby Airport. Those working in Greenway Plaza have easy access to the other buildings because they are connected by air-conditioned skyways and tunnels. Also, the area offers lots of underground parking that allows direct access to the office buildings. Greenway Plaza is very walkable, scoring an 84 on WalkScore. The surrounding areas are very flat and ideal for biking.

Although Greenway Plaza is primarily a business district and shopping center, it has plenty of amenities nearby. People employed here won’t have to go very far to find some delicious restaurants to meet colleagues for lunch. Try out Mia Bella, Tiny Boxwoods, On the Kirb, or Roka Akor. Greenway Plaza also has nice hotels nearby for visiting business partners and clients. Look up 36sixty by Sterling Suites, DoubleTree by Hilton Hotel Houston, or Four Points by Sheraton Houston Greenway Plaza.

Finding a new home for a business isn’t just about securing the best office space. It’s also about the atmosphere and the local opportunities for employees. Greenway Plaza has lots of nearby amenities that give companies plenty of places to go for office events and offer individuals and families fun things to do after work. Every Saturday, the local Urban Harvest Farmers Market sells fresh produce, season jam, bread, flowers, coffee, and more. Visitors can not only stock up on healthy groceries but also enjoy live music and demos from local chefs. The Music Box Theater features live music and sketch comedy and is a great place to hang out and get to know the locals. Those who enjoy the great outdoors can visit Levy Park’s community gardens, dog park, and activity lawn.

Century Development Corporation chairperson Kenneth L. Schnitzer, a visionary Texas real estate developer, came up with the idea for Houston’s first mixed-use development: Greenway Plaza. He wanted it to be like a second Downtown Houston. Century Development Corporate sold pieces of land in the Greenway Plaza area for great prices to realtors from the Houston area. That was the beginning of what would become an impressive office tower location housing more than 10 million square feet of commercial space.

One Greenway Plaza, one Greenway Plaza’s office buildings, opened in 1969, though Greenway Plaza’s official grand opening didn’t take place until 1973. Most of the story from this point onward involves tenants’ decisions to move to Greenway Plaza, expand, and stay. For example, an early influential tenant was the M. W. Kellogg company, which later acquired Dresser Industries and merged with Brown & Root to form Kellogg Brown & Root, or KBR. This American engineering, procurement, and construction company moved its headquarters from New York to Houston in 1970. At first, it only took up half of 3 Greenway Plaza, but eventually, it began renting space in a second building as well. When Dress Industries took over part of the lease in 1991, its thought leaders renamed the building Dresser Tower, which it is still called today.

A notable building in of Greenway Plaza is that of non-denominational Christian church Lakewood Church, which has one of the highest church attendances in the country. Since 2005, the church’s main campus has been in the former home of the professional basketball team the Houston Rockets. Televangelist Joel Osteen is the senior pastor of Lakewood Church, and his sermons have been broadcast worldwide. The Houston Chronicle’s Nancy Sarnoff noted that when the Houston Rockets moved out of that building, Greenway Plaza became “sleepy” because of the subsequent lack of evening activity and “feels like downtown Houston did 10 or 20 years ago.”

Greenway Plaza ownership has changed several times over the years. In 2013, Atlanta-based Cousins Properties bought Greenway Plaza complex along with an office tower in Downtown Fort Worth. It cost around $1.1 billion. Parkway Inc. purchased Greenway Plaza in 2017 and began renovating it.