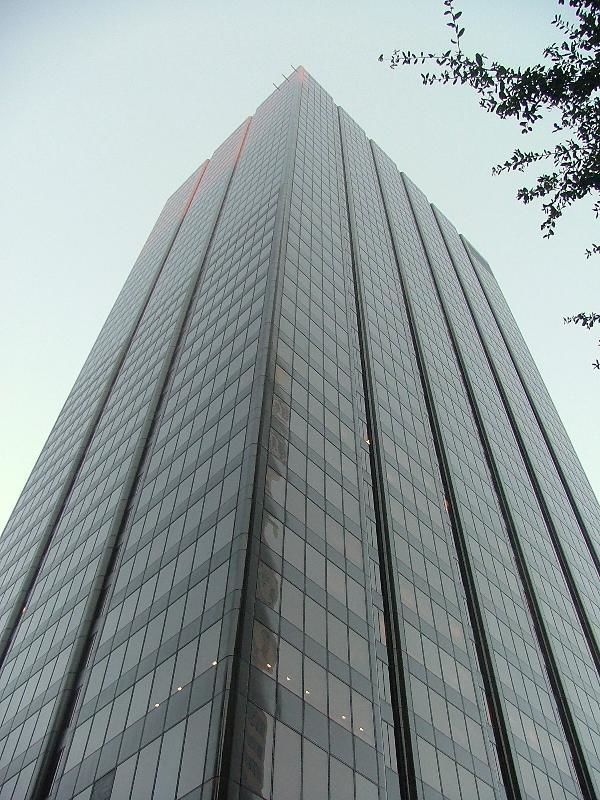 Houston Center is retail and office complex in Houston and its owned and operated by subsidiaries of Crescent Real Estate Equities Co. The three towers in Houston Center have almost 3,400,000 square feet (320,000 m2) of Class A office space. Opened in 1974, this building has 40 floors with Class A office space. It is the 19th tallest building in the city. It was planned to be the center of a master-planned “city within a city” that would have included a tram system that would have tied in with U.S. Highway 59and run into the tower itself, and a four-story 40,000 car parking garage. It currently has six levels of parking for 495 cars. Several levels of this building extend across Fannin Street and connect to 1 Houston Center. They include an x bracing where the proposed tramway would have been and a patio. It sits on top of Houston’s six-mile tunnel system.
In 2008 Crescent and the nonprofit Environmental Defense Fund worked together for 10 weeks to cost-effectively upgrade 2 Houston Center. As a result, Crescent will install new lighting, mechanical, and office equipment systems that will reduce the building’s total electricity usage by 11%. The new systems may save Crescent and the tenants of 2 Houston Center $400,000 combined each year, and dioxide emissions would be reduced by over 1,300 tons per year. Crescent plans to reduce 2 Houston Center’s electricity usage by 20% over a 10-year period beginning in 2008. The company anticipates that the reduction will save the company $700,000 per year.
The United States Postal Service operates a center in 2 Houston Center. The Houston Downtown Management District is headquartered in Suite 1650 and The Consulate is located in Suite 3000.