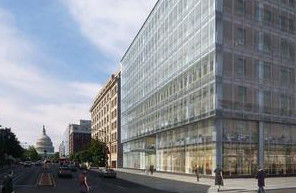 Opened in 2016, the Republic Square II is a modern nine story glass and steel structure with a jewel box design. The building was designed by the architecture firm Sheward Partnership and is addressed at 660 North Capital Street in the NoMa neighborhood of Washington, D.C.

The building appears as if it is entirely constructed of glass as its covert steel frame is overwhelmed by the beauty of its floor to ceiling glass paneled exterior. A canopy steel extends over part of the street in front of the entrance to the building’s lobby.

The Republic Square II is adjacent to Union Station and the Metro stop at Union Station which makes the location a dream commute for both tenants who live in the city and also in nearby suburbs. The most prominent tenant the brand new building has is Hyundai Motor America.

In addition to its aesthetically pleasing design and accessibility by public transit the building also features a central courtyard and roof deck exclusively for tenants as well as a fitness center and conference center.