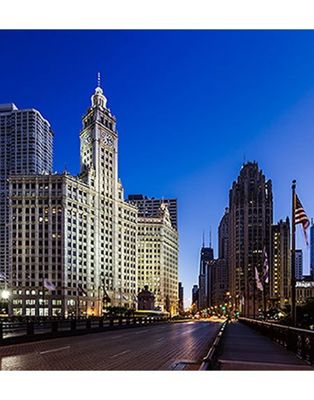 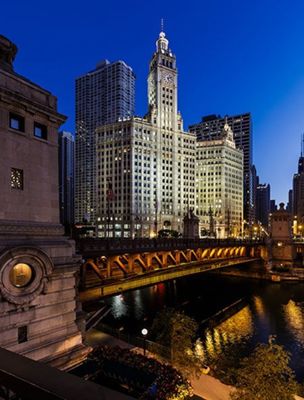 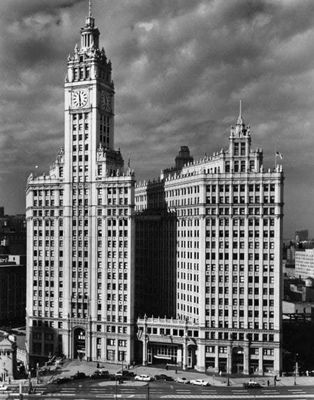 The Wrigley Building is located at 400-410 North Michigan Avenue. The South Tower stands at twenty-seven stories while the North Tower has eighteen stories.

In 1920, the Wrigley Building was the first office space available north of the Chicago River. This building was designed by Charles Beersman of architect firm Graham, Anderson, Probst and White and modeled after the Giralda tower of Seville’s Cathedral.

Upon the tower’s completion in 1924, this Chicago icon was the first building to offer air-condition. Since then the building has been recognized by the city as a landmark and received the prestigious award from the Travel & Leisure Magazine naming this building one of the world’s most beautiful clock towers. Winners of this award include Big Ben.

The exterior of the Wrigley Building is faced in over 250,000 terra-cotta tiles and boasts floodlights that have been shining every night since its construction except for a few occasions of war, replacement, and energy shortage.

The interior of this building has been recently renovated in 2013 and the lobby received considerable attention with the addition of marble clad walls and the inclusion of lobby clocks.

The Wrigley Building has seen on the big screen in movies that range from The Breakup to The Fugitive. Some of the notable tenants in this building include Grisko LLC, Bluebeam Software, and SE10 Creative LLC.