Businesses looking for centrally located office space in Midtown South should consider Union Square, a unique NYC neighborhood known for its thriving tech scene and historic parks. Securing office space in Union Square offers the opportunity to work among some of the greatest minds in technology and media while surrounded by rich history and culture.

Union Square, which rests at the junction of Broadway and Fourth Avenue, represents the southern border of Silicon Alley. Silicon Alley earned its name because of its impressive tech business and startup boom in the past few years. In 2015, venture capital firms invested more than $7 billion in Silicon Alley businesses. Dozens of global tech, media, and advertising businesses have offices in the Union Square area, including Facebook, Hulu, and Buzzfeed. Compass moved its headquarters to the neighborhood last year. Union Square is also home to more than 6,000 small businesses.

What Our Brokers Say About Union Square Office Space for Lease

Union Square’s convenient location in the heart of Manhattan, excellent hotels, vibrant outdoor space, and multiple subway options make it a popular place to work or meet clients. The neighborhood boasts a population of more than 25,000, and nearly 350,000 business professionals, students, and artists come and go during an ordinary workday.

The aforementioned Silicon Alley, which is named after California’s Silicon Valley, emerged in the mid-1990s with the establishment and growth of a large number of media tech startups in the Flatiron district and Union Square. Today, Silicon Alley is a “corridor that connects Midtown to Lower Manhattan, running past the Flatiron building at Madison Square Park and Union Square toward Soho,” according to Built in NYC. Some people now consider any technology or media startup in NYC as part of Silicon Alley. It depends on who you ask. Not only tech startups but also large corporations such as Facebook and Verizon are now considered part of Silicon Alley. The biotechnology sector is also growing here. One recent contribution to the tech scene in Union Square is the up-and-coming Union Square Tech Training Center, which will be a 21-story, “world-class technology training center that will finally bring new career pathways to low-income residents and people of color . . . “ says Jeremy Unger, a spokesperson for City Council member Carlina Rivera.

One of the best features of the Union Square neighborhood is the eponymous Union Square Park. It spans from 14th Street to 17th Street and from Union Square East to University Place. Notably, it touches surrounding neighborhoods Gramercy, Flatiron District, East Village, and Greenwich Village. The park is full of art, street vendors, musicians, dancers, and sometimes even protestors. Those lucky enough to work in the Union Square neighborhood can eat lunch in the park or just catch a break from the office to stroll around. It also houses Webster Hall, which hosts various musical performances, and Daryl Roth Theater, where people can see other types of live entertainment. Avid readers will want to visit the nearby Strand Book Store, which boasts more than 2 million different books.

Union Square provides a fun environment for foodies and proponents of farm-to-table. The area features a special program to provide fresh food in the city. Since 1976, the Greenmarket program in Union Square has allowed regional farmers to sell fruit, vegetables, and other farm-grown items to city inhabitants. Come to the market Monday, Wednesday, Friday or Saturday between 8 a.m. to 6 p.m. to purchase fresh food and experience Union Square culture. Do you fancy a more traditional city dining experience? Visit one of the many surrounding cafes, restaurants, or vendors. Our favorite restaurants in the area include Bowery Road, Ichabod’s, Villanelle, Gotham Bar and Grill, and Taboonette.

Union Square Office Commercial Space For Lease | By the numbers

Union Square is located at the heart of NYC’s burgeoning tech community, which now holds an impressive ranking as the second-largest startup ecosystem in the world. Tech companies now account for nearly 30 million square feet of NYC’s office space inventory, or around eight percent. Naturally, tech companies are attracted to the area, though other industries are represented as well.

Interested in finding the right Union Square office space for your business to begin or expand? Feel free to reach out, and we will connect you with one of our experienced commercial real estate brokers.

Getting Around: Transportation in Union Square

Union Square’s excellent location in the center of Midtown South makes it easily accessible from many Manhattan neighborhoods. It is bordered by the Flatiron District to the north, Chelsea to the west, Greenwich Village to the southwest, East Village to the southeast, and Gramercy Park to the east.

Those who need to fly can use Newark Airport, JFK, or LaGuardia Airport, all conveniently located nearby.

Allow us to help narrow down the search for office space in Union Square. Here are three of SquareFoot’s recommended properties in the neighborhood:

39 West 17th Street: Built in 1920, 39 West 17th Street is a 35,000 square foot building with 14 units. Currently, one 2,500-square foot unit is available for rent. Inquire for pricing information or a tour of this property. Multiple restaurants and bars are just steps away from 39 West 17th Street, such as BLT Fish, Flavabom, Karaoke One 7, Flatiron Lounge, and The Hummus & Pita Co. Use lines F, L, M, 1, 2, or 3 to get here. Those who need to drive to the office can park at Vincent 15 Parking LLC or Icon Parking, both located less than .25 miles from the building. Looking to grab lunch? Visit the nearby Hollywood Diner, Chelsea Inn, or Burger & Lobster.

18 East 16th Street: 18 East 16th Street is an office building located between Union Square West and Fifth Avenue. Built in 1907, it has been fully renovated; it has a bright, spacious interior with high ceilings and glass doors. Right now, two units in this building are vacant and ready to be rented. One is 4,900 square feet in size, and the other is 7,800 square feet. Contact us to inquire about pricing or to schedule a tour. The property has a Walk Score of 100 and plenty of nearby public transportation. Access 18 East 16th Street via trains L, N, Q, R, W, 4, 5, or 6 via the 14th Street—Union Square station that’s just a few minute’s walk from the building. If employees need more exercise than walking around, they can visit Monster Cycle Limelight, YMCA McBurney, or David Barton Gym, all of which are located less than .3 mile away.

37 East 18th Street: 37 East 18th Street is a 10-story commercial building with 67,000 square feet of rentable office space. Currently, one 7,500 square foot unit is available for rent. Contact us for pricing or a tour. This building has high ceilings, natural light, and large windows. One example of a notable tenant at 37 East 18th Street is Body Labs, a software development company. Access this property easily via trains L, N, Q, R, W, 4, 5, and 6, all of which arrive at the 14th Street—Union Square station that is less than a five-minute walk from the property. Get coffee at Starbucks, Beecher’s Handmade Cheese, or Brooks Brothers – Red Fleece Cafe’ all .1 mile or less away from 37 East 18th Street.

The area now called Manhattan was once called New Amsterdam and primarily inhabited by Dutch settlers. The English renamed the area “New York” after the English Duke of York and Albany in 1664. Several major American Revolutionary War battles were fought in Manhattan, such as the Battle of Fort Washington on Nov. 16, 1776. The Brooklyn Bridge was built in 1883. In the next several years, Manhattan and the Bronx were divided into two separate boroughs. It wasn’t until the 19th century that Manhattan began to grow as an economic center. The establishment of the New York City Subway and increased immigration helped boost the population of the area.

Union Square is a charming historic area known for the adjacent park that shares its name: Union Square Park, which was built in 1839 and redesigned in 1872. This bustling park and plaza, located between 14th Street and 17th street, provides space for professionals, New York University students, street performers, and the occasional protestor to mingle. One can also find art, historic landmarks, and the longest-running farmer’s market in New York City.
Union Square features several prominent artistic landmarks. One is the Metronome and Countdown Clock, a large digital clock over 14th Street that shows hours, minutes, seconds and tenths of a second. Union Square also includes an equestrian statue of U.S. President George Washington, which was the first public sculpture displayed in New York City since 1770. The bronze-cast equestrian sculpture represents Evacuation Day when the British departed from the city, and Washington and his troops returned to it. Other statues include Abraham Lincoln and Mohandas Gandhi.

Interested in finding the right Union Square office space for your business? Feel free to reach out and we’ll connect you with one of our commercial real estate brokers. 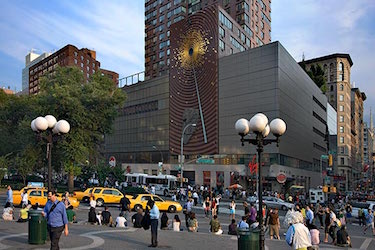 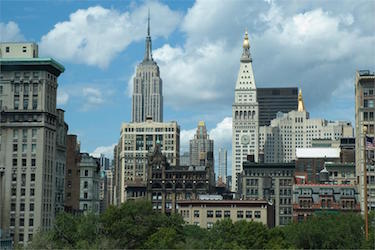