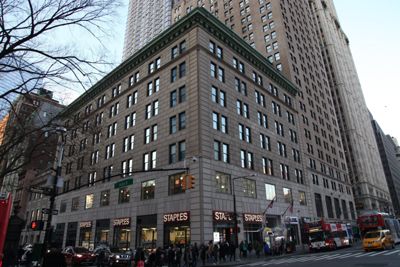 217 Broadway, New York, NY 10007 is located on the corner of Broadway and Vesey Street. The building was constructed in 1918 as the Astor Office Building and stands at a modest 9 stories tall with over 130,000 square feet in combined retail and office space. Designed by architects York & Sawyer, the structure has been renovated at numerous points through its long tenure. In addition to its colorful history, 217 Broadway benefits from its location on the cusp of the Financial District and Broadway. The building is within walking distance of some of the city’s landmark areas including City Hall, South Street Seaport, Wall Street, the New York Stock Exchange, Federal Hall, Trinity Church, Battery Park City, and the World Trade Center. In addition to the large number of amenities and office complexes, the building is highly accessible with the MTA’s blue, yellow, and green subway lines running just blocks away. As a result, 217 Broadway benefits from excellent placement and a vibrant history that makes it a charming option for many smaller organizations.