Chelsea, which attracts more than 6 million visitors each year, is an eclectic Midtown South neighborhood that is at the heart of one of New York City’s cultural cores. Chelsea one of the most in-demand submarkets for office space in NYC. It is well-known by locals and tourists alike for its expressive and diverse culture, with more than 200 art galleries, nearly 2,000 options for food and drinks, and an array of both boutiques and big chains for shopping. For a neighborhood only a square mile in size, there is something to satisfy every taste in Chelsea.

While Chelsea has a smaller tech presence than its neighbor, the Flatiron District, the notable presence of Netflix and Twitter—along with corporate offices of IAC (designed by Frank Gehry at 555 W. 18th Street), YouTube, Roc Nation, Venmo, and Uber—make excellent company for those looking to make the move. Earlier this year, Google’s parent company, Alphabet Inc., bought the Milk Building, a 325,000 square foot office and retail property. The Milk Building is connected to the Chelsea Market, which Google already owns.

Chelsea is also an ideal location for any business seeking to be at the heart of New York’s creative and entrepreneurial core. The established arts scene along with SUNY’s Fashion Institute of Technology attracts an innovative and educated crowd with an average age of 25-40. Businesses have their pick of smaller offices in co-working spaces to luxurious, sprawling floors in brick and beam buildings.

Those working in Chelsea will be able to find lunch, coffee, and gym options all pretty much within a five minute’s walk. In addition to the variety of foods Chelsea Market has to offer, our team recommends Sweets by CHLOE, The Donut Pub, Momofuku Noodle Bar, Chelsea Brewing Pub, La Sirena, Rocking Horse Cafe, Sullivan Street Bakery, Salinas, and The Red Cat. For more info on where to eat and drink in the neighborhood, check out our Chelsea Lunch and Coffee Guides. Some of Yelp’s top-rated gyms in Chelsea include NYSC Lab, HACKD, and iLoveKickboxing – Chelsea NYC.

Demand for Chelsea office space is high, and vacancy rates in this neighborhood are among the lowest in the city. Currently, the neighborhood offers just over 24.4 million square feet of total inventory, with approximately 650,000 square feet more under construction as of Q1 of 2019. About 6 percent of the total inventory is vacant and available to new renters.

Businesses seeking office space in Chelsea can expect to pay an average of just over $96 per square foot. This pricing is comparable with other popular neighborhoods such as Hudson Square and the Plaza District. Chelsea rental prices are considerably higher than the $81 per square foot New York City rental average.

To get around the high rental prices in Chelsea, office space seekers can look for Class B space, which is considerably cheaper than Chelsea’s Class A offerings, or explore office sublease options. These agreements are signed directly with current tenants and tend to allow for less commitment than a traditional lease, where the norm is 3-5 years. However, utilizing an office sublease does not offer the same assurances as working with a landlord does, so it’s important to negotiate sublease terms with a broker.

Residents of all five boroughs and nearby suburbs can easily get to Chelsea, thanks to several nearby public transit hubs, including Penn Station. Chelsea is listed among the top 20 most walkable areas in NYC with a Walk Score of 99.

One of the best places to walk in Chelsea is the High Line, a linear park constructed on what used to be a train viaduct. Visitors can explore gardens, view street performances, study art, and grab some food along the way. The High Line runs from Gansevoort Street to 34th Street near the Javits Center. Most of the rest of the viaduct had been demolished in 1960 and was effectively abandoned in the early 1980’s. Construction on the park began in 2006 and first opened to the public in 2009. An additional stretch near 10th avenue and 30th street opened in 2018. The High Line’s success has served as an inspiration to other cities looking for ways to transform obsolete infrastructure into public space and inspire accompanying real estate development.

Commuters have no shortage of options to get to work. In addition to commuting through Penn Station, employees can take the A, C, and E trains on Eighth Avenue; 1, 2, and 3 trains along Seventh Avenue; or F and M trains on Sixth Avenue. Chelsea is also accessible by bus routes M7, M10, M11, M12, M14, and M23, and houses the main entrance to the 34th Street—Hudson Yards station for the 7 train. In addition to access via Amtrak and NJ Transit, commuters can easily access the PATH trains to Jersey City and Hoboken.

153 West 27th Street: Constructed in 1913, this 12-story office building houses 28 total rentable units. Right now, five units ranging from 1,400 to 3,000 square feet in size are vacant and available to new renters. Contact us for pricing or for a tour of the property. This building presents a wonderful option for businesses searching for an office space near plenty of public transportation and lunch options. 153 West 27th Street has a Walk Score of 100 and is easily accessible via trains 1, 2, 3, B, D, F, M, N, Q, R, W, C, E, and the PATH train. Dine at restaurants such as The Red Cat, Salinas, or Bill’s Bar and Burger; or, meander through the Chelsea Market for even more options.

238 West 30th Street: 238 West 30th Street is a 14-story office building located within quick walking distance of Penn Station, the Fashion Institute of Technology, and the Manhattan Mall. Constructed in 1926, this building has more than 64,000 square feet of rentable space. Two units are currently available; one is 2,500 square feet in size, and the other is 2,600 square feet in size. Contact us for pricing or a tour. To get to 238 West 30th Street, use the Red, Orange, or Blue Lines at Penn Station. The 34th Street—Herald Square station is also closeby. Grab coffee at Dunkin’ Donuts barely .1 mile from the office and stop by Jimmy’s Burger Shack or Brother Jimmy’s BBQ for lunch.

Industrialization in the 1850s took advantage of access to the Hudson River piers and led to the construction of numerous warehouses, factories, lumberyards, breweries, and tenements. Many of these original buildings have been redeveloped for new businesses and apartments. The Chelsea Historic District was designated in 1971 and last expanded in 1982.

Chelsea’s 23rd Street area used to be NYC’s theater district. In 1884, Hotel Chelsea opened, and in 1868, Pike’s Opera House opened on this street. Today, Chelsea is best known for its place at the center of the art world. The neighborhood boasts more than 200 art galleries of varying sizes, and their visitors are a huge source of revenue for local businesses. The galleries are another of Chelsea’s many unique perks to local employees. In addition, Chelsea has become a unique shopping destination, featuring boutiques Comme des Garcons and Balenciaga, as well as Alexander McQueen, Stella McCartney, and Christian Louboutin.

Chelsea has an abundance of inspiring office spaces that showcase endless possibilities for remodeling a workspace. In 2011, a 100,000 square foot warehouse building was purchased by British theater company Punchdrunk to create a five-story performance venue “The McKittrick Hotel,” now home to the immersive, site-specific theatrical production Sleep No More, a staple of Chelsea’s entertainment scene. Slightly less elaborate, Google’s Chelsea office is filled with NYC-themed rooms and provides access to floors with ladders as well as elevators, the startup Outbrain is praised for its central conference room “The Fishbowl,” and YouTube has permanent production sets available to their creators. 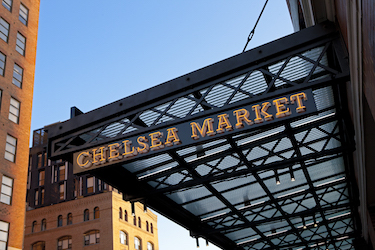