Giants such as Goldman Sachs, Deutsche Bank and American Express already work out of the Financial District, as do many startups and mature mid-size firms. Because of the available inventory, accessibility via public transit, and low office space rental prices, the Financial District appeals to a wide range of businesses inside and outside the financial services world. For example, technology companies are moving from Midtown and other locations to FiDi in increasing numbers to take advantage of the cheaper rent and other perks. LifeBEAM, Sisense, Olo, and Namely all operate in the Financial District.

More than 25 percent of working individuals in the Financial District work in finance or insurance. During the day, FiDi comes to life with thousands of young professionals climbing the corporate ladder and tourists seeing the sights; at night, it tends to become calm and quiet compared to other areas of the city. However, gradually more restaurants and nightlife opportunities are opening up as the population increases. More than 48,000 people live in the Financial District, and the average household income is $191,807. Almost half of residents hold a college degree, and more than 30 percent have a graduate degree as well.

The Financial District is located in Lower Manhattan encompassed by the West Side Highway, Chambers Street, Brooklyn Bridge, and City Hall Park. FiDi is loosely defined as the area south of City Hall and East of Battery Park and Battery Park City. The corner of Wall Street and Broad Street is often considered the heart of the neighborhood.

To get a break from the stresses of work, check out the South Street Seaport, a historic district with shopping, gorgeous views of the Brooklyn Bridge, New York City’s first luxury movie theater and plenty of places to eat. Looking for a place to meet up with a client? Popular business lunch destinations in the Financial District are the Blue Ribbon Federal Grill, Broadstone Bar & Kitchen, and Trinity Place. For more recommendations of things to see, do, eat, and drink in the area, check out our Best of FiDi local guide and our team’s favorite Financial District coffee shops.

The Financial District is one of the most affordable neighborhoods to rent office space in the New York City office market. The average asking price is just over $58 per square foot—much lower than the $81 per square foot NYC average.

The Financial District also houses a larger amount of office space than any other neighborhood in the Downtown NYC submarket. With nearly 38 million square feet of total inventory and more than 563,000 square feet under construction as of Q1 of 2019, FiDi offers a plethora of renting options. Right now, 10 percent of office spaces are open and available for new renters.

Like most districts in NYC, getting around by car can be a chore because of the excessive traffic. In FiDi, that mostly applies during business hours and rush hour because the neighborhood still tends to clear out to some degree in the evening. Those who need to get around by car can check out some parking resources to find parking in FiDi.

– 75 Maiden Lane: 75 Maiden Lane, built in 1921, is a 12-story building with seven units available to rent ranging from 1,086 to 8,600 square feet in size. This Class B property tends to attract technology and consulting firms. It has a Walk Score of 100 and a Noise Index of .51. It’s easy to get to 75 Maiden Lane. From Wall Street, take trains 2, 3, 4, or 5 to get to 75 Maiden Lane; from Fulton St-Broadway-Nassau, take A, C, J, Z, 2, 3, 4, or 5; from Cortlandt Street, take R or W. Coffee lovers will be pleased with the close proximity of Starbucks (.1 miles away!) and several other options—Taz Cafe and Potbelly. 75 Maiden Lane also has a very accessible gym located less than 2 miles away: the New York Sports Club.

– 101 Greenwich Street: 101 Greenwich Street is a 26-story, U-shaped building located on Greenwich between Rector Street and Trinity Place. Choose among fifteen different units available for rent ranging from 268 to 13,000 square feet in size. The Class A, 480,000 square foot building was renovated in 2017 into Downtown Manhattan’s first full-service office building featuring a secured lobby and dispatch elevators. Workplace hospitality company Convene is one of the chief tenants at 101 Greenwich Street. Convene provides amenities and hospitality services for the building, such as a microbrew coffee shop, in-building programming, and food delivery services. To get to 101 Greenwich Street by subway, take trains 1, R, or W from Rector Street Station or trains 4 or 5 from Wall Street Station. Contact Battery Parking Garage or Icon Parking to learn about parking options near this property.

– 120 Broadway: The Equitable Building houses more than 1.8 million square feet of office space spread throughout 40 floors. Currently, one 2,229 square foot unit is available for rent. Located at the corner of Pine Street and Broadway, 120 Broadway is both a national historic landmark and a New York City landmark. It was first constructed in 1915 and renovated from 1983-90. The Equitable Building has attracted clients from several industries such as finance, law, and insurance. Notable tenants working out of 120 Broadway include Dealogic, ALM, New York State Attorney General, Tower Group Companies, and Lester Schwab Katz & Dwyer. With a Walk Score of 100 close proximity to the green, yellow, and brown MTA subway lines, getting to the Equitable Building is a commuter’s dream come true. Access bars, coffee shops, and even a gym less than .2 miles away.

The Financial District roughly overlaps with the boundaries of the New Amsterdam settlement of the late 17th century, and it’s one of the oldest neighborhoods in Manhattan. In 1904, NYC got its first subway company, Interborough Rapid Transit, beginning the Financial District’s evolution into a center for finance, business, and commerce. The World Trade Center was built here in 1973. FiDi’s northeast corned earned the nickname “Insurance District in the early 20th Century because of the impressive number of insurance firms headquartered there. The early 2000s brought an increase in permanent residents, transforming the Financial District from just an office community into a home for 15,000-20,000 residents.

Wall Street, the symbolic center of American capitalism, has an interesting history of its own. Originally, Wall Street was an actual wall that was intended to protect settlers from Native Americans, pirates, and the British when the state of New York was still a Dutch Colony. One of the anchors of Wall Street, the New York Stock Exchange, originated in the 18th century when traders formed the Buttonwood Agreement in an effort to regulate trading and promote fairness. In the 19th century, the Wall Street area included both residences and businesses, but eventually most of the people who lived there moved to Midtown Manhattan. J. P. Morgan and John D. Rockefeller’s work helped change Wall Street’s economy from industrial to financial. Some people believe the 20th century was Wall Street’s most successful era. Later, the Financial District faced the destruction of the World Trade Center in 2001. Before that, the Financial District was already known for its high number of highrises, but the loss of the World Trade Center inspired the development of even more buildings. In recent years, FiDi has also made a comeback as a residential neighborhood. Since 9/11, the neighborhood’s population has tripled.

The Statue of Liberty, a famous tourist destination on Ellis Island, overlooks the Financial District. View it across the channel from Manhattan or take a Statue Cruise across the channel to see one of the country’s most popular landmarks up close. France gave the USA the 152-foot high iconic landmark in 1886. 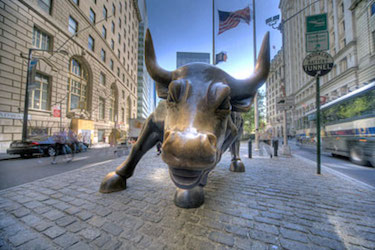 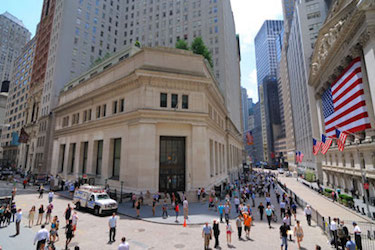